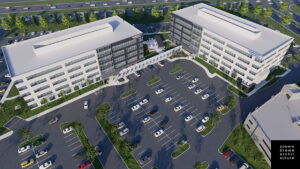 The construction team raised the final panel in August 2021, completing the structure in an impressive six months. They are currently finishing the exterior skin and interior buildout of each building.

The two-building campus will include a 144,000-square-foot parking garage and is scheduled to be completed in the second half of 2022.

Robins & Morton is serving as the general contractor and the architect is Powers Brown Architecture.