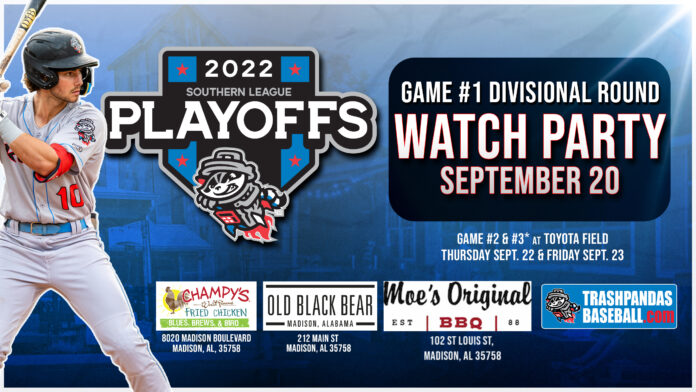 MADISON – Excitement was the feeling Monday as the Rocket City Trash Pandas boarded their buses for Tennessee and Game 1 of the Southern League North Division playoffs.

From the cheering staff and fans who lined the parking lot with signs and flags as the buses pulled away:

From the players who won the first- and second-half titles:

From the manager who led the team to a league-best 81-57 record:

“They’re excited,” said Andy Schatzley. “… and that’s the way it should be.”

The Trash Pandas will take on the Tennessee Smokies in a best-of-three playoff series. Game 1 is Tuesday in Kodiak, Tenn., and Game 2 is Thursday at Toyota Field. Game 3, if necessary, will also be at Toyota Field.

While there is excitement, Schatzley said it will be “business as usual” for his team.

“We’re off Mondays and play Tuesdays (during the regular season),” he said. “They’ll have off today and go to work tomorrow.

“You want it to stay as normal as possible.”

Ingram, whose 50 pitching appearances tied for the most in Double-A, said keeping the everyday routine – even though this is the playoffs – is important.

“The next game is the most important,” he said. “I’ll stick with my plans, my routine.

Throughout the 2022 season, the support of Trash Panda Nation has been a key to the team’s success. Rocket City’s 49-20 home record at Toyota Field led the Southern League and ranked among the best in all of Minor League Baseball.

That support will continue to be a major factor with the playoffs approaching.

“The fans play a huge role in our success,” infielder Jeremiah Jackson said. “Them being there and cheering for us, it really keeps us in the ballgame and it can make it tough for other teams.”

Knupp said the staff is ready to spread the excitement among the fanbase with its legendary promotions.

“The promotions are all about the team,” she said. “This is going to be an electric atmosphere.

“This group of guys … made it easy for us to promote them.”

There will be watch parties for Tuesday’s game at Champy’s on Madison Boulevard, Moe’s Original BBQ in Town Madison, and Old Black Bear Brewing Co. in downtown Madison.

“If you have to stay in town, join us at the watch parties,” Knupp said.

Meanwhile, the players and staff are excited to return to Toyota Field to host the Smokies and, hopefully, clinch the playoffs in front of the home crowd.

“We’re ready to take on the Smokies,” Knupp said. “And welcome them back with open arms.

“Come on out and cheer on the team.”

“That’s a gigantic part of what makes this team successful,” closer Eric Torres said. “We’re unstoppable at home. Pitching in front of a full crowd when they’re all standing on their feet, it’s hard not to strike out that guy.”

And, ever the quintessential promoter, Knupp said: “There are plenty of (good seats) available.”

If the Trash Pandas win the Division Series, they will advance to the Southern League Championship Series to face either Pensacola or Montgomery. The best-of-3 series will begin on the road Sept. 25 before wrapping up Sept. 27 and, if necessary, Sept. 28 at Toyota Field.